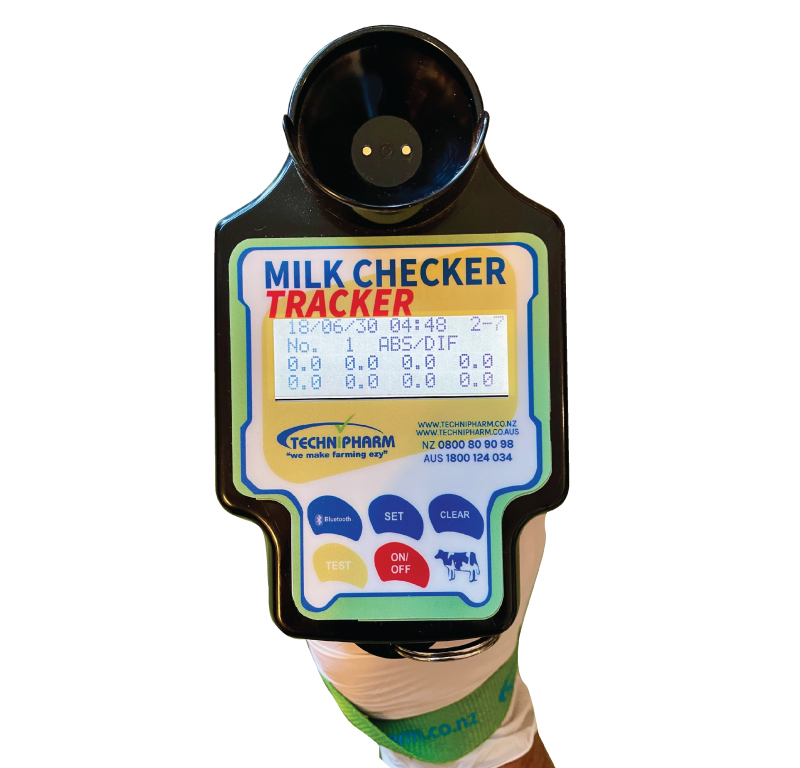 Have You Seen The New Milkchecker(c) Tracker?


Technipharm has been leading Mastitis Detection Technology since its introduction in 1998.

We started with a single test single readout unit which took a while to get off the ground, but once it did many farmers obtained a unit to help get their SCC down.

At the time there was a big focus by Fonterra and DEXEL to get SCC down and many farmers needed all the help they could get.

With continued R and D and technology improving we launched a new unit on the market in 2010 which had the ability to show all 4 readings on the screen simultaneously which was a great help in determining the quarter infected quickly. A few years later we added a back lit screen, this allowed fast readings to be obtained under any milk shed condition

This year we are introducing a new model which includes many of the old features and more. The new Milkchecker Tracker™ shows all 4 readings of the quarters obtained in absolute format and in differential format. To establish if a quarter is infected it is required to establish the differential between quarters in order to know if there is an infection or not.

Milk as we know contains milk solids, each quarter produces its own “formula” and not all quarters are the same, significant differences are present when there is an infection,  quantities of sodium chloride is expelled from the milk glands, alarming the defence systems of the cow to “act” to release white blood cells. These salt levels we can measure and set off against each quarter which gives us an accurate measure of the infection being present and its severity. Readings are instant and displayed on screen. These conductivity readings are showing up well beforte we see inflated SCC levels so with Milkchecker Tracker™ you are ahead of the infection.  After treatment the Tracker can help establishing if the readings have come down and if the milk is ready for the vat again, continued inflated readings means something more sinister is going on upon which we recommend get veterinarian assistance.

The Milkchecker Tracker™ also can “log”  readings via Blue Tooth on an app for historical comparisons on a per cow basis. For example this could be a helpful feature for problematic cows with a history of infections.

Milkchecker Tracker™ is available from TechniPharm (r) Nz Ltd in limited numbers, place your order for the new season ahead today.